Christmas made easy and get your gift wrapped.

For a gold coin donation, you can have your gifts wrapped by our staff and Heart Kids volunteers.  When you donate for gift wrapping you will be supporting the wonderful children and their families at Heart Kids.

Our chosen charity this year is:

Our gift wrapping booths are open:

You can find our gift wrapping booths:

One booth outside 2degrees

One booth outside ASB

WHERE DOES YOUR DONATION GO?

Our charity benefiting from the generosity of LynnMall customers by donating to have their gifts wrapped this Christmas is Heart Kids.  Read on to find out more about Heart Kids and how they will use the donations:

A little bit about them:  Heart Kids have been in the community supporting children born with heart conditions, and their families, for almost 40 years. We provide a vital support network through our hospital based Family Support team as well as around the country. There’s not many places in NZ that we don’t have a presence and we are working hard to fill those few gaps. By providing one to one direct support, running in-person Murmurs Coffee Groups and family events, as well as virtual workshops and presentations – our heart families are able to face the challenges associated with having a ‘heart child’ knowing they are supported and not walking this journey alone. Every year over 600 little babies are born with some type of heart defect and they will require treatments and surgeries throughout their lives. As there is no cure or prevention – there will always be a need for Heart Kids NZ in the community.

Plans for the donations raised:  There are over 1,000 heart families in Auckland and the money raised will be used to support these families both at home and also during hospital admissions.

Heart kids are born brave hearts, they go through so much at such a young age and still manage to smile and laugh and give cuddles. They are inspiring and beat the odds every day.

Evie Kemp is an Auckland based artist and designer. A lot of her work is in textile or surface design; she spends her days applying her love of colour and pattern to almost anything she can get her hands on!

For our Christmas paper, Evie was given the brief to create an iconically “Christmassy” design but without the typical (and off-season) imagery of snowy scenes. Evie instead incorporated the icons of a kiwi Christmas… “because our Christmas traditions are important too, they’re just different!”

Evie’s favourite icon on the wrapping paper is the fish and chips! “My favourite!” And the cheeky Pukeko stealing a chip!  Whilst Evie loves a kiwi Christmas now, it definitely wasn’t the case when she first moved to New Zealand!

“My Family moved to NZ [from England] when I was 14 and we were living up in Red Beach [on the Hibiscus Coast, Auckland]. My parent’s insisted on the “Christmas Day at the beach” thing as it was such a novel idea for them. The weather (typically) though wasn’t playing ball and it was rainy and as a very grumpy teenager I  just went and sat in the car!”

Evie has since come around to enjoying and embracing the positives of having a Christmas lunch outdoors!

Evie loved creating our wrap knowing it would be beneath trees on Christmas Day! “It’s a real thrill to see everyone getting their gifts wrapped in it at the wrapping stations in the run up to Christmas. It feels like after the year we’ve had there isn’t a better time to truly celebrate the uniqueness of a kiwi Christmas!” 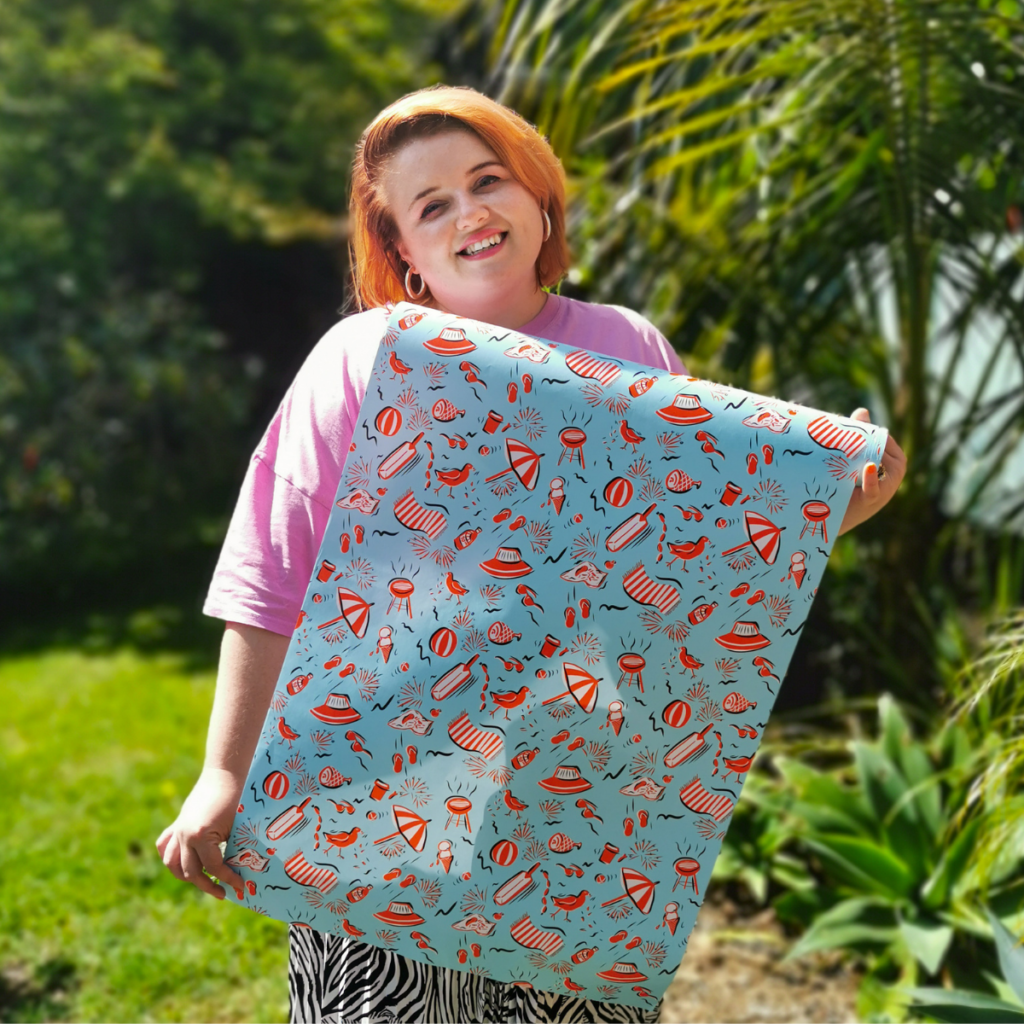